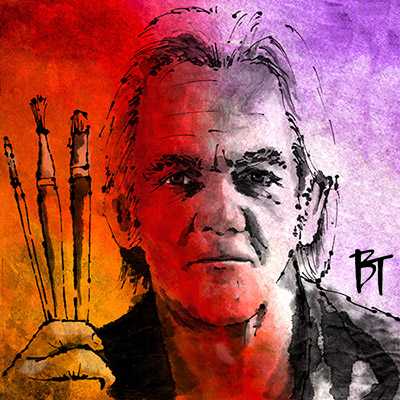 Every year I travel a few months through a distant country. Other lifestyles, customs and views constantly question my own values ​​and norms. Often a memory differs from the story an old travel photo seems to tell. Have my memories changed over the years? Or was the old photo not a good representative of the situation? What is the truth and do I want to know it exactly?
With my paintings I often work with material from my large travel archive as a starting point. I translate a crop or collage into large areas of color that represent the unclear memories. Then I start on a ‘new journey’ on the canvas; sometimes I try to ‘reconstruct’ the original image with the brushdrawing that arises, but then also I try to create my own truth again.
The two dimensions in the work provide a dialogue between the newly drawn reality and the large colored memories. The interaction between the two dimensions gives each painting a deeper layer that constantly evokes new details and memories while others disappear.

My artist career started with a training at the Graphics Department at the Academy of Visual Arts in Arnhem. This was followed by a long, varied career as a graphic designer, illustrator (ao Volkskrant, vpro-gids), teacher, pop musician, composer of film music / commercials and world traveler.
Decades playing as a guitarist in various bands finally led to the successful 2-man project Black Market Audio. The catchy, danceable instrumental music has been used extensively in commercials (Michelob, Toyota, Renault, Bufetti), TV series and films. The albums ‘Autorama’ and ‘Shake’ have been released in Japan and Italy.
With Black Market Audio I have done the research / design for two compilation CDs; ‘Dutch Rare Groove’ and ‘Dutch Exotica’. The latter compilation is also an example of the combination of two passions: travel and music.
For four years I was one of the founders of the Multimedia Academy in Amersfoort. But then I decided to focus exclusively on my passions: travel, music and art.
Under the name BlueHipster I made many cartoons, illustrations (including Volkskrant, vpro-gids) and paintings.
On YouTube there is a collection of 21 multimedia projects in which my passions travel, music, poetry and art come together via my website.
In 2010 I returned from Utrecht to my native region and opened a house/gallery ‘De Heerlijkheid van Wisch’ in Terborg. After a period of various projects and experiments, I have found my own personal visual language.